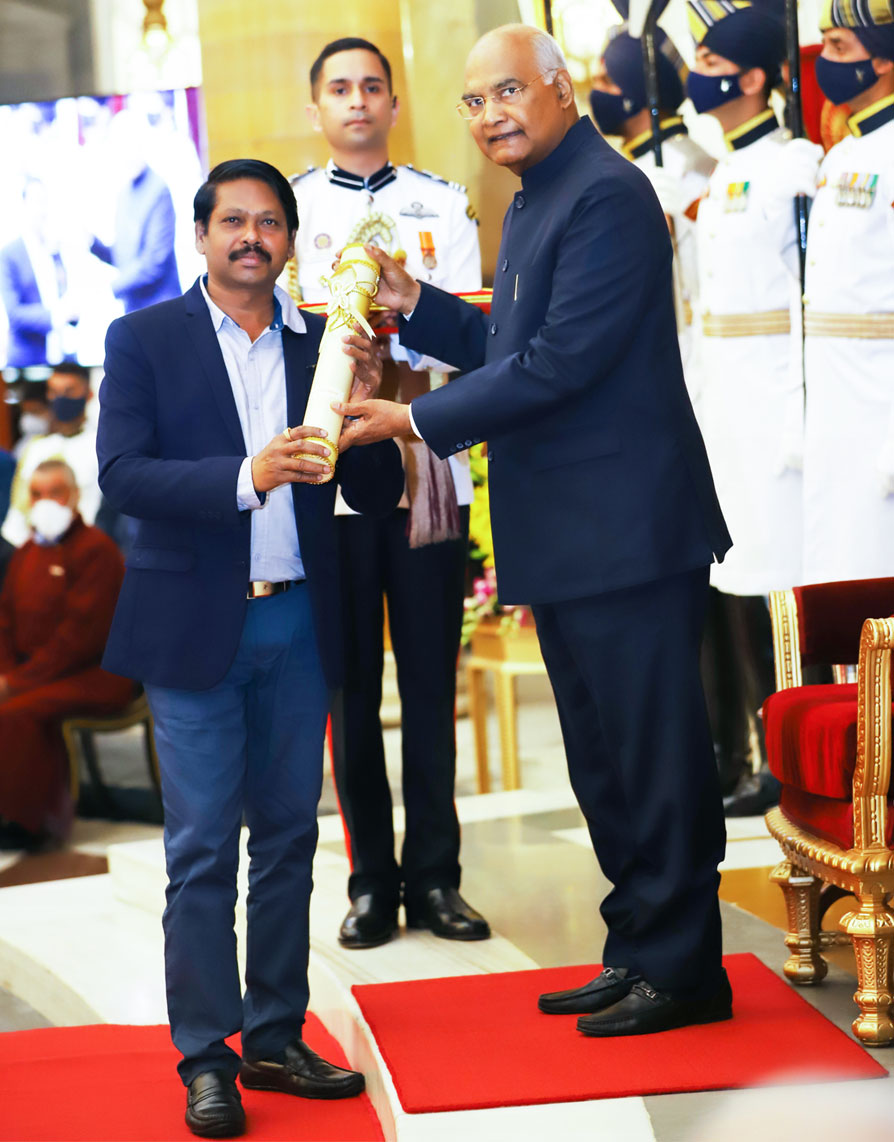 Mr S.Damodaran founded Gramalaya in 1987 and works towards a larger goal: integrated development of women and children in rural areas through economic and health empowerment. Soon, he discovered that among other problems, open defecation resulted in the pollution of surface water bodies and drinking water sources. Mr S. Damodaran changed the track. Rural intervention was planned to cover safe drinking water supply through hand pumps, piped water supply through individual tap connection and sanitary household toilets in the villages coupled with hygiene education. By switching to the comprehensive approach, Gramalaya has formed SHE (Sanitation and Hygiene Education) Teams and AWASH (Association for Water, Sanitation and Hygiene) Committees so that the community ownership could be enlisted for sustainable sanitation practices and development.

When his NGO helped make Thandavampatti, a habitation of 62 homes in Tamil Nadu’s Tiruchirappalli district, into India’s first open-defecation free (ODF) village in 2003, Gramalaya’s Founder Mr S. Damodaran, 57, could not have imagined that the initiative would one day transform into a massive drive. Now, he runs a successful campaign for total sanitation in villages and slums across South India (excluding Kerala), and has already helped 226 villages and 186 slums achieve the ODF tag so far. In the Tiruchirappalli City Corporation, in the year 2002 Kalmandhai slum was announced by the City Corporation Commissioner as India’s first 100% ODF slum with his support in constructing a community toilet and child friendly toilets in the slums through Gramalaya NGO. Both the above achievements were recorded in the WSP South Asia (World Bank) publications.

Mr S. Damodaran’s initiatives is the SMART- Safe/Sustainable, Maintainable, Affordable, Recyclable and Technically perfect- toilet concept Innovative methods are being made use of for waste management, including the recycling of waste into manure via composting and the use of bath water to raise kitchen gardens. Mr S. Damodaran is also responsible for the development of 24 low-cost toilet models and a centre for toilet technology and training. This has prompted other NGOs to approach him to provide training on water, sanitation and community development. The UNDP designed pour-flush twin pit toilet with a diversion chamber, for example, is one model that has seen successful promotion.

The SMART toilets promoted by him reached more than 50,000 individual households in South India where women and adolescent girls are using the household-level toilets constructed with the SBM – Puducherry and other Corporate groups CSR Funds.  The District Collectors and SBM Project functionaries of the different States supported him in declaring the village panchayats as open defecation free.  His work through sustainable sanitation initiatives resulted in women and adolescent girls led a dignified life with privacy, safety and security.

The Menstrual reusable cloth pads he has developed three years ago has reached the adolescent girls studying in Government Schools and women in the villages and helped the women for better health.  So far more than 5,00,000 reusable cloth pads were promoted by him that has saved our environment from unnecessary garbage heaps on the streets and our water bodies wherein single use plastic sanitary napkins spoiled our environment which are not bio-degradable.

Mr S. Damodaran, successfully executed model projects in rural, urban, coastal and tribal areas with household toilets, strategies and approaches in the South and scaled up operations for making an OD- free India. As a result of the works done by Mr. S. Damodaran and considering the replicability of the program, his work through Gramalaya was published in the Twelfth Five Year Plan (2012 – 2017) as Faster, More Inclusive and Sustainable Growth Volume 1 of the document in page number 164 Box 5.4.